Upgrading your gaming PC with DDR5 RAM may feel unnecessary right now, but its lightning-fast speeds will soon become the standard as we move into the future. However, with great performance comes higher temperatures and we are now officially living in the era of fan-cooled memory sticks (and yes, they have RGB LEDs).
Geil has officially launched the Evo V, the first kit of DDR5 RAM to feature active cooling, in the form of two teeny tiny fans on the corners of the heatshield. The manufacturer says that its admittedly charming solution helps to keep the modules’ operating temperatures “in an ideal thermal range” by providing “approximately 45% more thermal disappation than traditional [methods].”
The Geil Evo V seems like a monstrous example of just how fast DDR5 RAM can get, with speeds of up to 6,600MHz it’s no wonder it needs a dual fan cooling setup. You can make it look even cooler with its ‘glacier white’ color theme, but you can pick it up in grey too.
If you fancy picking yourself up some DDR5 RAM, just make sure your system’s armed with a combo of the best gaming motherboard and one of Intel’s best gaming CPUs. 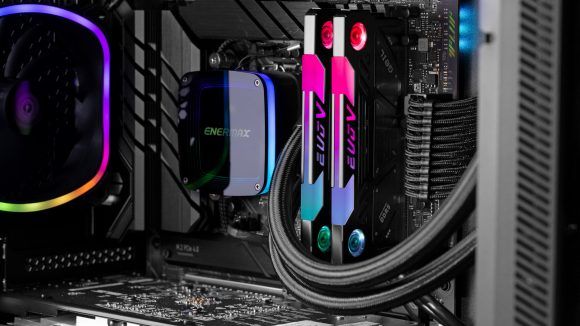 AMD doesn’t yet support DDR5 RAM in its Ryzen desktop processors, but that’s all set to change when Zen 4 CPUs arrive later this year.
Get involved in the conversation by heading over to our Facebook and Instagram pages. To stay up to date with the latest PC gaming guides, news, and reviews, follow PCGamesN on Twitter and Steam News Hub, or download our free app for Overwolf.
Samuel Willetts Hardware Writer
Published: May 19, 2022
Sam’s keeping a close eye on the latest developments on Intel Core and AMD Ryzen CPUs, waiting for the right time to build his own Windows 11 gaming PC. He also covers GPU, VR, and Steam Deck news.

A global version of the RedMagic 7 Pro Android gaming flagship...